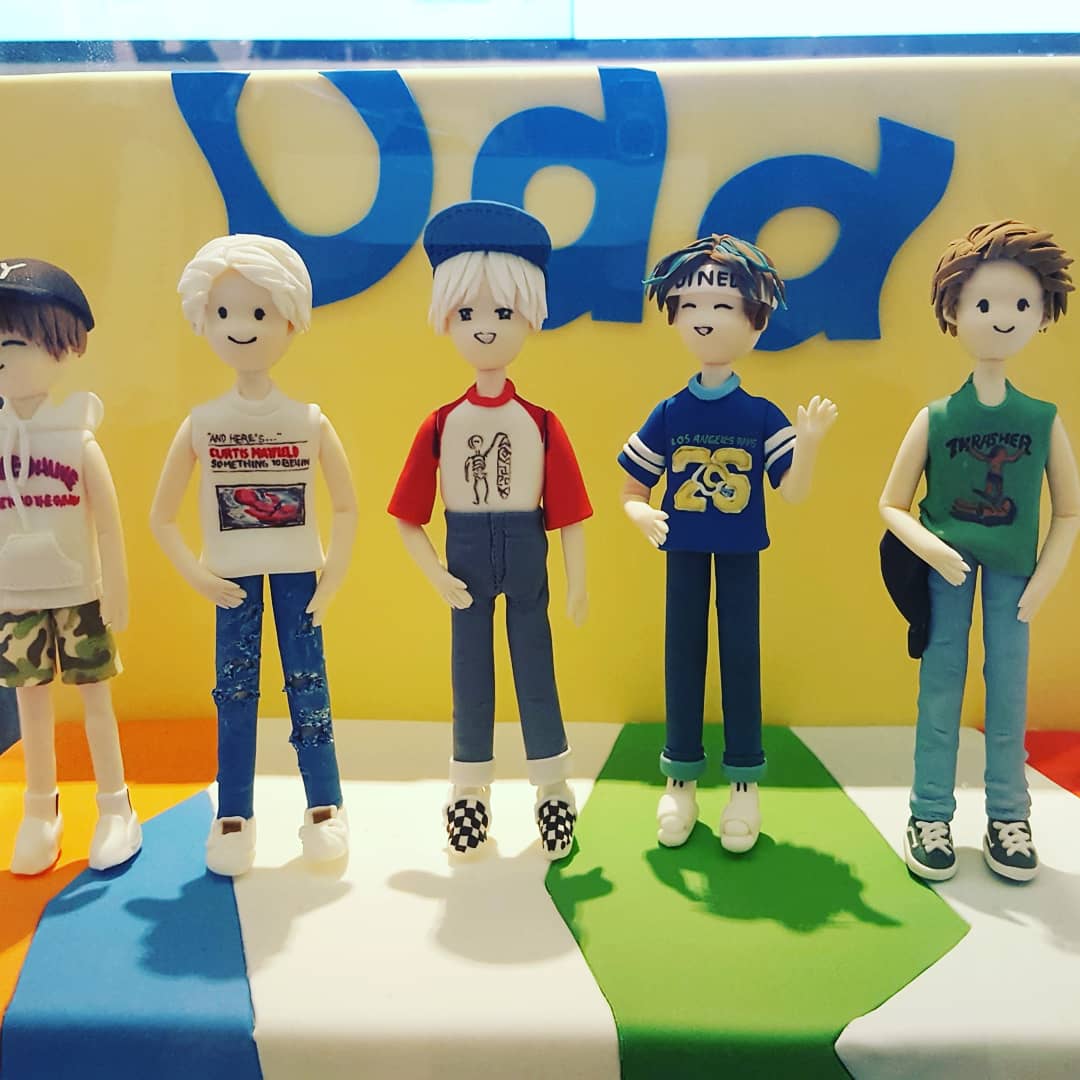 I have been a big Shinee fan since high school. They made their debut in 2008 and were my gateway group unto Kpop. Although I may not listening to Kpop as much as I used to, I would always follow and keep up with the group.

When the news hit me that Jonghyun had passed away due to suicide (12/18/17), I was crushed. I finally felt what other people felt when MJ had passed on. His and Shinee’s music helped me through hard times and help fight the darkness that always creeps up on me. More on my thoughts and feeling in JH’s passing in another post.

So the day before I found out that SM Entertainment had erected a temporary memorial for JH at Coex Mall to allow fans to come and pay respect, get closure, etc. I didn’t know about the mall existance, let alone the SM section which has a cafe, a store, a museum, and many other fun things. This is my second time living in Korea, and J call myself a Kpop fan. Regardless, I only had on day free, and the memorial will be taken down on the first of May, so I resolved to go.

When I checked online it said the SM section of the mall opens around 10am (I later learned the opening time was 10:30). I know how crazy Kpop fans get, so I arrived early. At 9am there was already a small line, but I would be among the first to enter. I am greatful I got there when I did. By 10am the line was extrememly long and wrapped around the building.

When the doors opened at 10:30 and I got waved in, I rushed to get to the elevator so I can be one of the first to get to the cafe. Prior research showed that the cafe is usually the busiest place and sometimes the line to get in can take hours. I was happy to be the first one in, cause I got to get my pick of seats.

SM Cafe. Lucky to be the first one in and get my pick of the seats.

The cafe had all sorts of drinks and snack based on many of the different idols and groups that SM represents. Even the tables and chairs had autographs of famous musicians, actors, etc. that had visited in the past. (I also signed my name, gotta generate buzz for myseld some how.) I regret not eating cause everything looked delicious. I settled with some apple juice (which came in a small Shinee water bottle) and people watched for a bit. It was fun to see people fan out over every little detail.

The bottle my apple juice came in. Meet my new water bottle.

A little diorama of Shinee and their “Odd” album displayed below the cash register.

After I left the cafe, I had to go up one more floor for the memorial. It was the main purpose of my visit after all. I wanted to explore more and take my time, but I had to catch the subway to head to soccer practice in just 30 minutes. 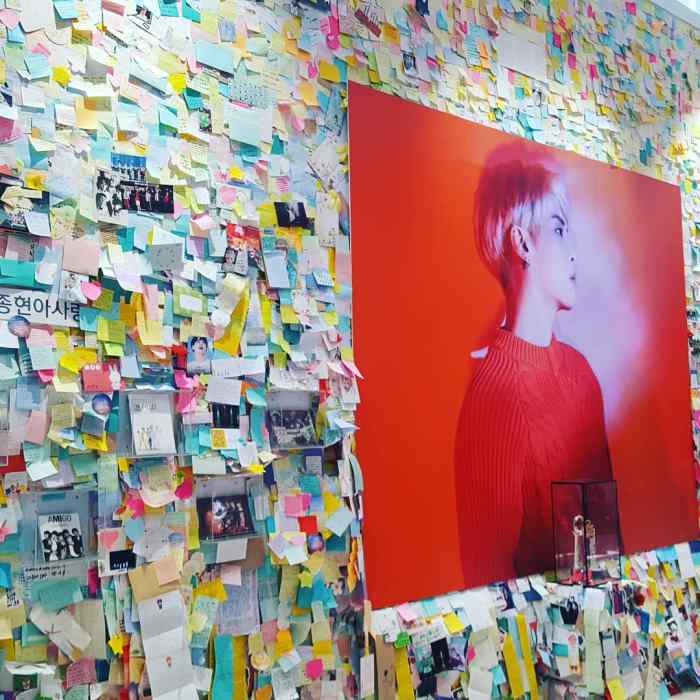 When I got to the memorial their were two big posters of JH on the walls and many, many fans. It made it hard take a good photo. Not only that, but there were many fans just bawling their eyes out. I was sympathetic of course, but also put off a little bit. Mainly due to toxic masculinity I cannot cry or fewl in public, but also because the room made the crying echo and it felt a little disrespectful to other people paying their respects. Not saying they cannot cry or feel, but think of the others who are there as well.

To the side of one of the posters was a small booth with various starionary and a donation box for the charity they established in JH’s memory. After donating a few thousand won, I took a big post it note and wrote about what he meant to me and hoping he was at peace. I won’t lie, I have attempted suicide in the past and Shinee’s musoc did help me cope back then. I’ll admit, I did feel quite emotional but due to being raised in a society of toxic masculinity, I didn’t show it. I posted my note next to the tribute poster (the red poster is drom his post-departure album “Poet”). I felt bad posting over other people’s notes, but everyone was doing it (the walls literally had layers in languages from around the world), and my feeling were just as valid as anyone elses. Hell, it probably got covered up not too long after I left. 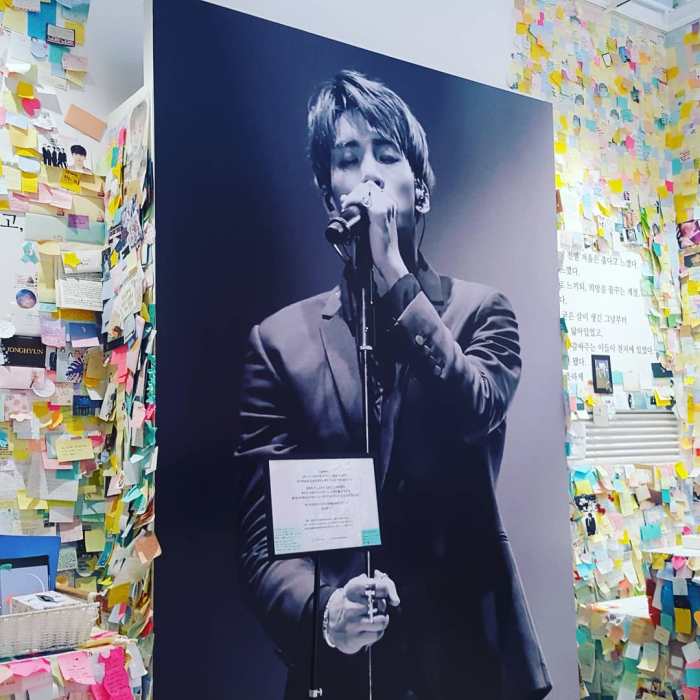 After posting I left and headed to the subway. I plan on coming back in the near future to fully explore what SM Coex has to offer and blog about it then as well. This trip was just to pay my respects and get a little closure.