On Wednesday, the U.S. Senate Committee on Commerce, Science and Transportation convened a hearing titled, “Does Section 230’s Sweeping Immunity Enable Big Tech Bad Behavior?” The CEOs of Facebook, Twitter and Google testified at the hearing about their liability protections, privacy concerns and allegations of bias.

Section 230 of the Communications Decency Act, created 30 years ago, protects internet platforms from liability for third-party content and gives them broad discretion over how they moderate content on their platforms. In response to being fact checked by Twitter, in May, President Donald Trump issued an executive order to roll back Section 230 protections, claiming that companies censor the free speech of conservatives.

Party lines were strongly drawn at the hearing on Wednesday, as Republican senators barraged the CEOs with accusations of bias against conservatives and Democrats honed in on social media’s responsibility to moderate harmful and misleading information. Many of the Democratic senators called the hearing a sham and an attempt on the part of Republicans to bully social media platforms into allowing more misinformation and disinformation to proliferate, as well as an attempt to sow confusion among voters as to what information they can trust.

“I have never seen a hearing so close to the election on any topic, let alone something that is so obviously a violation of our obligation under the law and rules of the Senate to stay out of electioneering,” said Schatz. “We never do this, and there is a very good reason that we don’t call people before us to yell at them for not doing our bidding during an election.”

Schatz noted that since June, six Republican-only bills have been introduced, all of which threaten platforms’ ability to moderate content on their site, and that as we near the election, the Republican effort has become more aggressive.

Aside from subpoenas for social media CEOs to testify in Congress and general attacks from right-wing news organizations and Republicans in the Senate, the Committee itself published a movie trailer-like ad on Instagram promoting this hearing, as well as a poster (see below) that seems to this reporter to be pretty partisan. 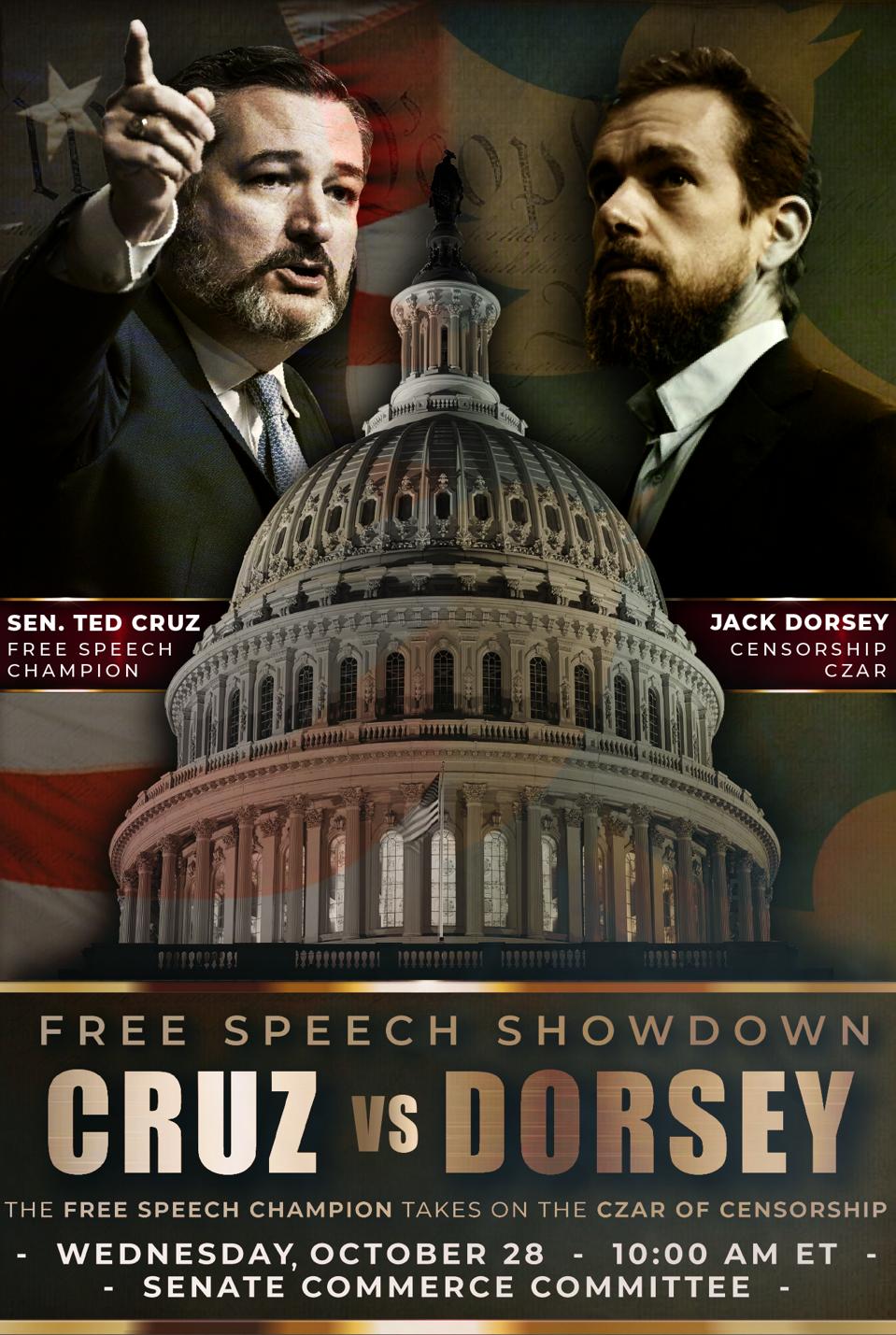 “What we’re seeing today is a scar on this committee and the United States Senate,” he said. “What we’re seeing is an attempt to bully the CEOs of private companies into carrying out a hit job on a presidential candidate by making sure they push out foreign and domestic misinformation meant to influence the election.”

A bit of background as to how we got here

This hearing follows in the wake of pushback from Trump and many conservatives against Twitter and Facebook after they suppressed links to the New York Post’s story about Democratic presidential candidate Joe Biden’s son, Hunter Biden. Facebook had reduced distribution of the story that contained unconfirmed claims with questionable sourcing, and Twitter had blocked users from posting the story entirely. The situation promoted yet another demand-tweet from Trump to repeal Section 230 and the Republican-led Senate to subpoena Dorsey, accusing Twitter of election interference.

FCC Chairman Ajit Pai then announced that his agency would move forward with a rulemaking to clarify the meaning of Section 230, despite the fact that the law is designed to prevent such intervention from the FCC.

Various Republican senators at the hearing pointed to the NYP example as further confirmation of their beliefs that the platforms censor conservative content or control content in a way that benefits the Democratic party. When questioned, Mark Zuckerberg pointed out that his company did not censor the post, but suppressed distribution slightly until it could learn more. He said the company has been on high alert for potential Russian disinformation campaigns after a warning from the FBI. Twitter CEO Jack Dorsey noted that he had similar concerns about hacked materials and that the content was only censored for 24 hours, after which time Twitter amended its mistake.

Committee chairman Senator Roger Wicker (R-MS) started off his line of questioning around conservative bias by accusing Twitter of allowing foreign dictators to post propaganda routinely without restriction while simultaneously restricting the president.

“In March, a spokesman for the Chinese Community Party falsely accused the U.S. military of causing the coronavirus epidemic,” said Wicker. “After this tweet was up for some two months, Twitter added a fact check label. However when President Trump tweeted about how mail-in ballots are vulnerable to fraud, a statement that I subscribe to and agree with, a statement that is in fact true, Twitter immediately imposed a fact check label on that tweet.”

(Later in the hearing, Senator Maria Cantwell (D-WA) condemned Wicker’s outright support of promoting mail-in ballot disinformation.) Dorsey didn’t mention the timing of the labels in his response, but Twitter only started labeling tweets in May, and this instance of misinformation occurred in March.

Wicker also pointed to tweets from Iranian Supreme Leader Ayatollah Khameini calling for an elimination of Israel and promoting anti-Zionist violence that still remain up on Twitter’s platform. Dorsey responded that “saber-rattling”is part of the speech of world leaders in concert with other countries, and that Twitter at this point only labels tweets that promote in-country violence. 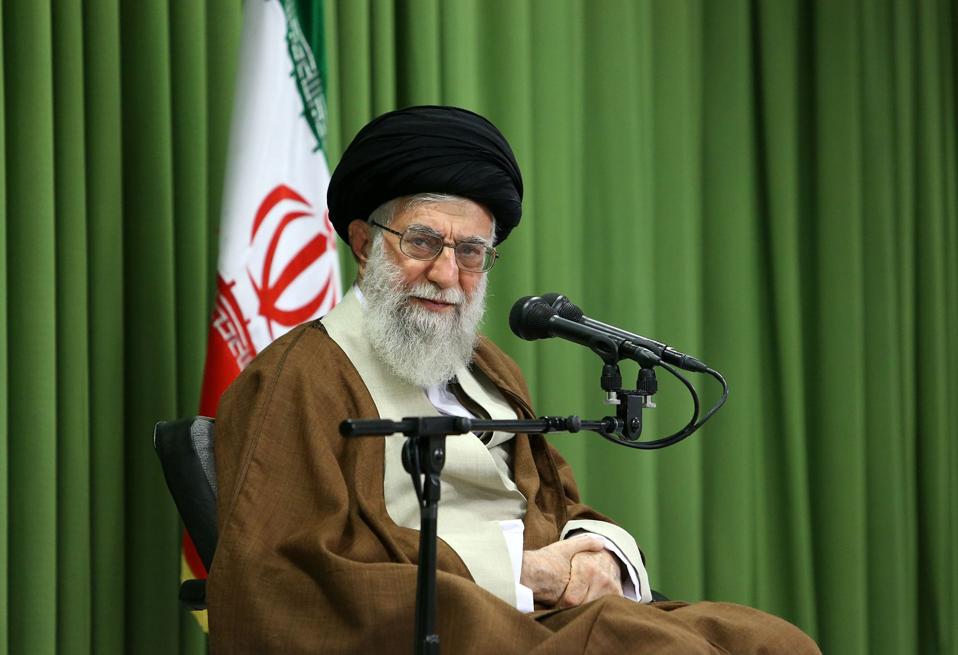 While Wicker made compelling points about Twitter’s content moderation policies generally, by focusing on the tweets of foreign adversaries, he did not exactly prove that the platform favors liberals over conservatives in the U.S.

Republican Senator Mike Lee also called out disparities in “censorship” between liberal and conservative voices, although many liberals have argued the opposite in regards to Facebook, and studies have both discredited this concern and proven that conservative voices are more dominant on social media.

Lee took some liberties in defining censorship as blocking content, fact checking, labeling content, or demonetizing websites, and asked the CEOs to provide examples of high profile accounts that the companies had censored.

Zuckerberg and Dorsey were quick to point out that they didn’t censor any true speech in an established sense of the word “censor” because many of those in question, like posts from Trump about mail-in ballot fraud, are still perfectly visible, but merely contain a label to add additional context. Pichai also said that Google doesn’t censor, but rather applies moderation policies equally, and that Google has taken down ads on both sides of the campaign for violating the company’s policies of graphic violence.

“There is a disparity between the censorship of conservative and liberal points of view,” said Lee. “You have the right to set your own terms of service and make decisions about violations, but given the disparate impact of who gets censored on your platforms, it seems that you’re either not enforcing your terms of service equally, or alternatively that you’re writing your standards to target conservative viewpoints.”

Ah, but there’s a third option here. Are high profile Democrats less likely to share hate speech and misinformation around election integrity and coronavirus? Researchers at Cornell University recently found that the largest driver of coronavirus misinformation came from Trump, which consequently has health and safety concerns for social media users and the country at large due to the president’s reach. A recent study found conservatives more likely to share misinformation. A separate study on Reddit behavior found much more racist speech and white supremacist content coming from right-leaning pages.

As a follow up, Senator Jon Tester (D-MT) asked the three CEOs if they would perform the same sort of fact-checking and labeling of Biden’s posts if he said the same “crazy stuff” that Trump said. All three said that if they found violations of their policies that they would enforce action no matter who it applied to. Zuckerberg added that whenever Biden posts about the election, Facebook adds the same labels adding context about voting to his posts as it would with any other candidate.

As with all recent discussion around social media content moderation, this one comes down to trust.

“After Russia was incredibly successful in disrupting our democracy four years ago, our adversaries learned a chilling lesson,” said Senator Tammy Duckworth (D-IL). “Social media companies cannot be trusted to put patriotism above profit. Facebook and Twitter utterly failed to hinder Russia’s sweeping and systemic interference in our 2016 election.”

Republicans don’t trust social media companies to moderate content fairly between conservatives and liberals. Democrats don’t trust social media companies to do enough to prevent the promotion of disinformation cooked up by foreign intelligence services, and they don’t trust Republicans not to spread that information. Duckworth called out her colleagues across the aisle for “falsely claiming censorship when responsible actors attempt to prevent hostile foreign adversaries from interfering in our elections” and asked each CEO to make a personal commitment that they’d continue to counter domestic disinformation with dangerous lies such as “masks don’t work” while aggressively removing foreign disinformation meant to harm the election. All three agreed to this commitment. 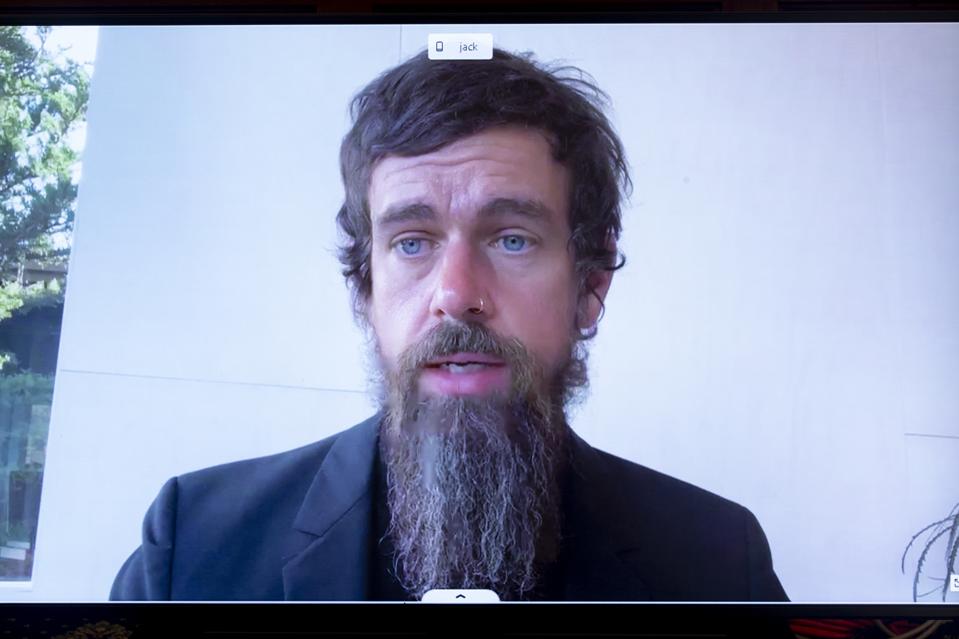 WASHINGTON, DC – OCTOBER 28: CEO of Twitter Jack Dorsey appears on a monitor as he testifies … [+] remotely during the Senate Commerce, Science, and Transportation Committee hearing ‘Does Section 230’s Sweeping Immunity Enable Big Tech Bad Behavior?’, on Capitol Hill, October 28, 2020 in Washington, DC. CEO of Twitter Jack Dorsey; CEO of Alphabet Inc. and its subsidiary Google LLC, Sundar Pichai; and CEO of Facebook Mark Zuckerberg all testified virtually at the hearing. Section 230 of the Communications Decency Act guarantees that tech companies can not be sued for content on their platforms, but the Justice Department has suggested limiting this legislation. (Photo by Michael Reynolds-Pool/Getty Images)

During his opening testimony, Dorsey recognized that free speech and safety are often interconnected and can sometimes be at odds, and noted that removing Section 230 would likely result in far more removal of online speech, as well as limit social media’s ability to address harmful content.

“I do not think anyone in this room or the American people want less free speech or more abuse and harassment online,” said Dorsey. “Instead, what I hear from people is that they want to be able to trust the services they are using.”

Dorsey said that to earn the public’s trust, his company is committed to transparent content moderation processes, straightforward appeals processes, empowering algorithmic choice and protecting the privacy of those who use Twitter. Zuckerberg more or less mirrored that sentiment, while Pichai drove his point home that Google is a place for all backgrounds and all viewpoints. All three expressed their willingness to work with the Senate to come up with a legislative framework to bring Section 230 into 2020 and beyond.

“At the end of the day, we all share the same goal: free access to information for everyone and responsible protections for people and their data,” said Pichai.

Roundup of the Latest Industry Movers and Shakers

3 Times You Need an Economic Consultant