A group of volunteers helped the Los Angeles Mission, a nonprofit that provides services … [+] and shelter for the homeless in LA, increasing their fundraising and raising awareness.

It was late November 2020. The Los Angeles Mission, a nonprofit that cares for the homeless, saw demand for weekly grocery boxes grow 200%. The pandemic caused numbers they had seldom seen. Now Thanksgiving made it worse.

While brainstorming on what to do, the mission reached out to their newly formed LA Mission Arts Council for their expertise. In response, the council used social media to report on canned food needs. 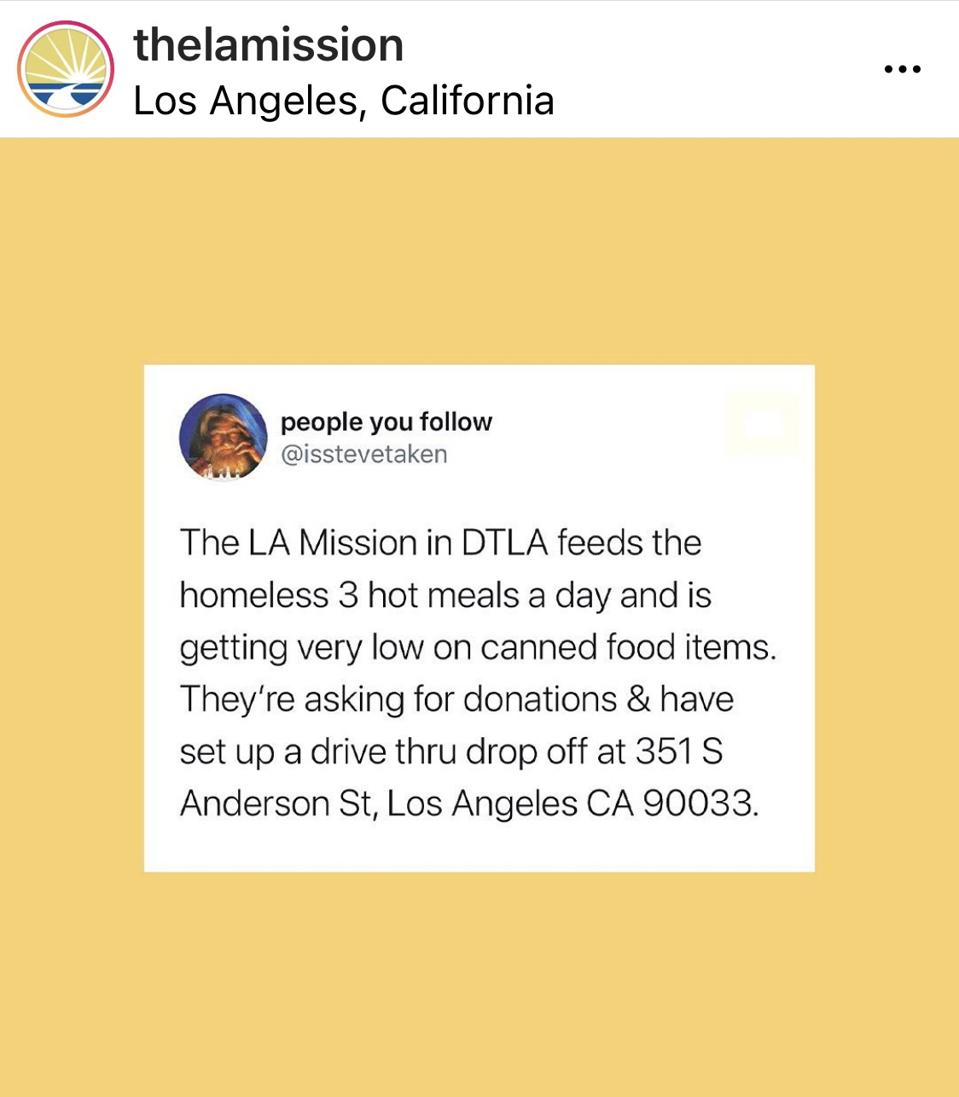 The next thing they knew the post had been shared repeatedly and continued to garner thousands of “likes”. Several local television news channels even contacted the mission to write a story.

For weeks the LA Mission received boxes – and trucks – full of canned goods. They received so many donations that there weren’t enough trash cans in their warehouse to store them. The nonprofit bought more bins, and that food continues to help fill boxes today. Even celebrities like Ben Affleck, according to the nonprofit, wanted to know how they can help.

This is just one example of how a group of volunteers are transforming fundraisers and raising awareness about the LA Mission and Los Angeles County’s homeless crisis. The group, known as the LA Mission Arts Council, is made up of 11 volunteers who work in a variety of creative professions.

The journey here began in the summer of 2020. Eli Graham, a former producer at a marketing agency in Los Angeles, longed for more purpose. He observed and participated in the Black Lives Matter protests that began after the death of George Floyd. He saw social media become a breeding ground for meaningful conversation, education, and change – he wanted to be a part of it.

Graham, who had a history of addiction and mental health issues, decided that he would best serve the homeless population in LA County – the place where he grew up. 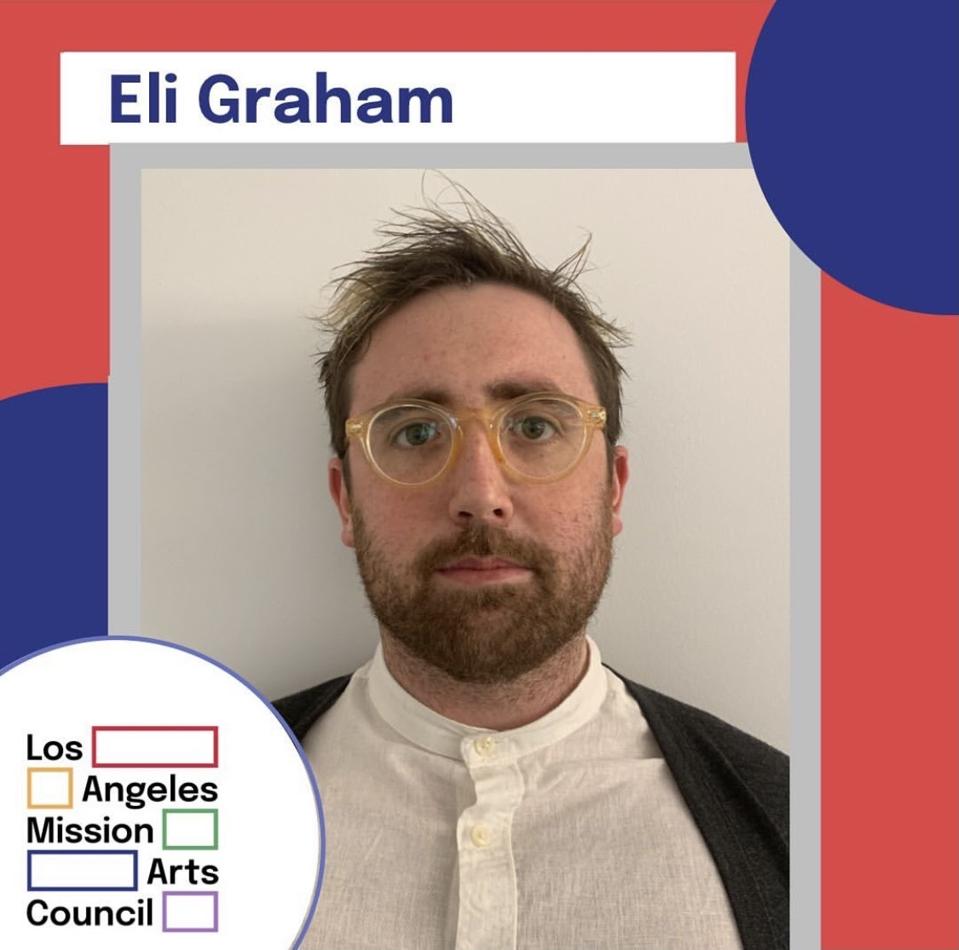 Eli Graham reached out to the LA Mission in August 2020 to find out about volunteer opportunities … [+] Since then, they have helped raise more donations and raise awareness about the fight against nonprofits and homelessness.

In August, he contacted the LA Mission to see how he could be of use.

“I received an email from the mission stating that there are limited volunteer opportunities at the moment due to the pandemic,” said Graham.

But Graham had another idea how he could help: he could use his manufacturing and marketing expertise to help the mission promote themselves and reach out to a younger audience of potential donors. And then he realized he could bring friends and other creative experts with him.

Graham reached out to friends and alumni – people who work as graphic designers, art directors, copywriters, etc. – and asked if they would be willing to volunteer their time doing pro bono digital marketing work for the LA Mission To make available.

Immediately people jumped on board.

Graham then went to Michelle Trinh, the mission’s vice president of marketing and media relations, and suggested the idea.

“Eli shared what sparked his passion for serving others. Seeing all the social injustice issues that were emerging that summer, he wanted to serve this community of homeless men, women and children on Skid Row,” said Trinh.

“And so I said to him, ‘Well, you know, I work with a marketing agency. But how about you help me with social media?’ He came back to me and said, “Sure, and I have a group of friends who are also in the same industry who want to serve.” Then he started this group and we started working together. “

According to Trinh, most of the Mission’s fundraising drives come from individual donors through their direct mail and digital programs. They have been sending newsletters and written appeals for years. They raise funds, as they would say, through “traditional” efforts.

But since the social media explosion, the Mission couldn’t figure out exactly how to use the space. Within a few months, Graham and the LA Mission Arts Council opened up the area.

“I’ve worked with social media agencies before. We tried different people to help us out with social media. But I haven’t seen the kind of reaction I have at the LAM Arts Council,” said Trinh. “Your contributions resonate with people in terms of engagement and even donations.”

The 11 volunteers who are part of the council all have full-time or freelance jobs but have continued to put tremendous efforts into improving the visibility of the mission.

First, they created a set of slogans, copies, templates, and a style guide to adhere to as they began building the Mission’s brand on social media. Because of the pandemic, they met through zoom, planning, and creation. And then they went to work.

They’ve created unique and exciting content that is in line with the Mission’s now 25,000-plus Instagram fan base. And they see success both financially in donations to the mission and in terms of awareness.

According to Trinh, the group raised roughly $ 50,000 for the LA mission in less than a year. Success can be measured in a number of ways, including posts that have gone viral for newly launched campaigns.

“We’re trying to find ways to disrupt the way the fight against economic housing and food insecurity is going on right now,” said Graham. “We want to use disruptive tactics, disruptive marketing efforts and new media. We want to create interesting partnerships; we want to energize this fight.”

Graham and the LA Mission Arts Council recently launched a project and campaign called “Do It For LA”. You work with a celebrity or an influencer, design an item of clothing, and then sell it – with all the proceeds going back to the mission. The project also spreads awareness of a local business that the celebrity is stepping up.

Her first partnership was with Dillon Frances, a DJ from LA. They then teamed up with model Tyra Banks on International Women’s Day. 100% of sales went to the Mission’s Anne Douglas Center for Women to help homeless women get back on their feet in LA. 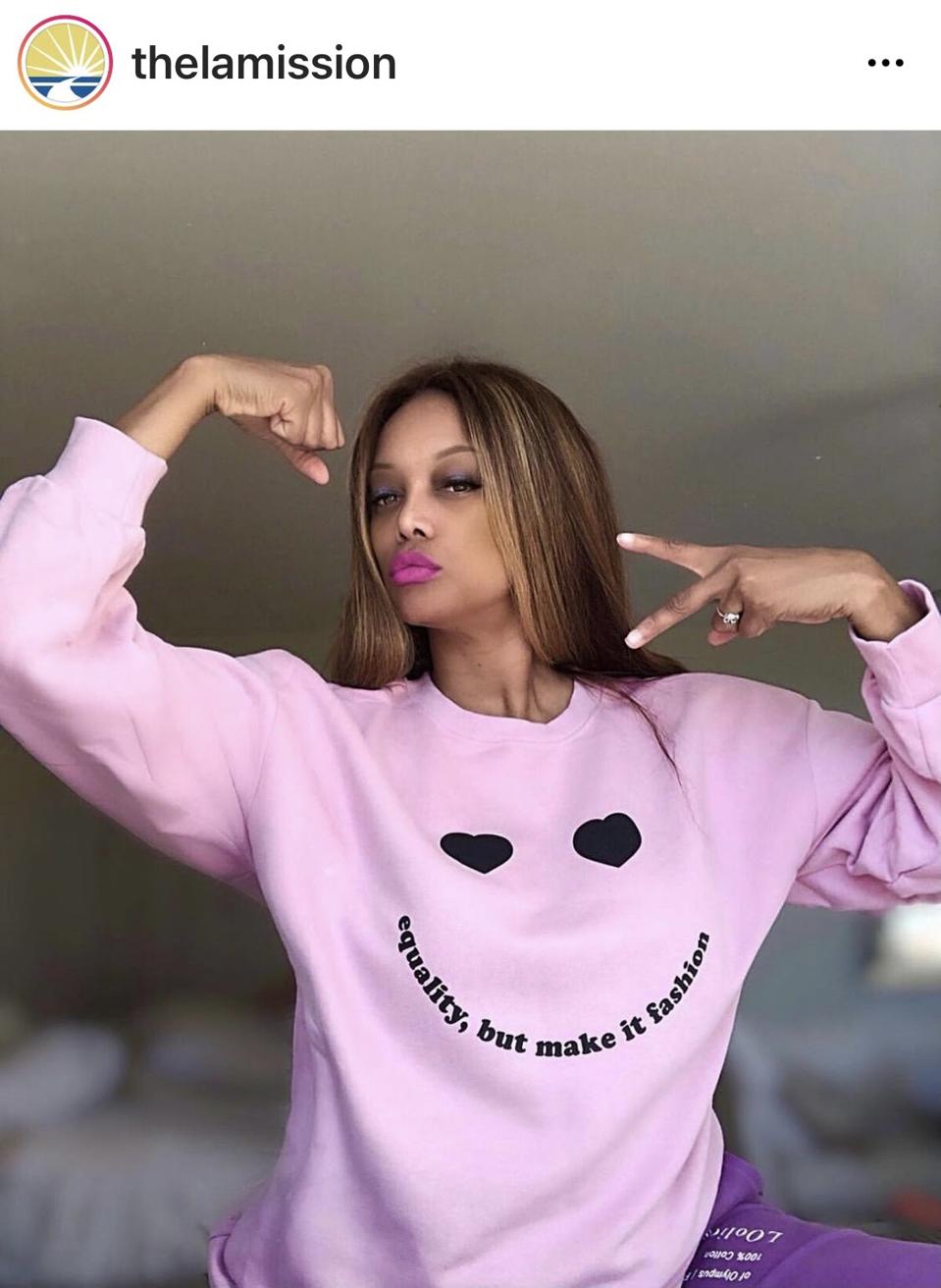 Tyra Banks partnered with the LA Mission Arts Council for their second “Do It For LA” campaign.

The council also partnered with actress Tia Mowry to create a shirt with the tagline “Protect And Respect The Black Woman”, with all proceeds from sales going to charities. With this partnership, they have also raised awareness of the local Ethiopian restaurant Meals By Genet. 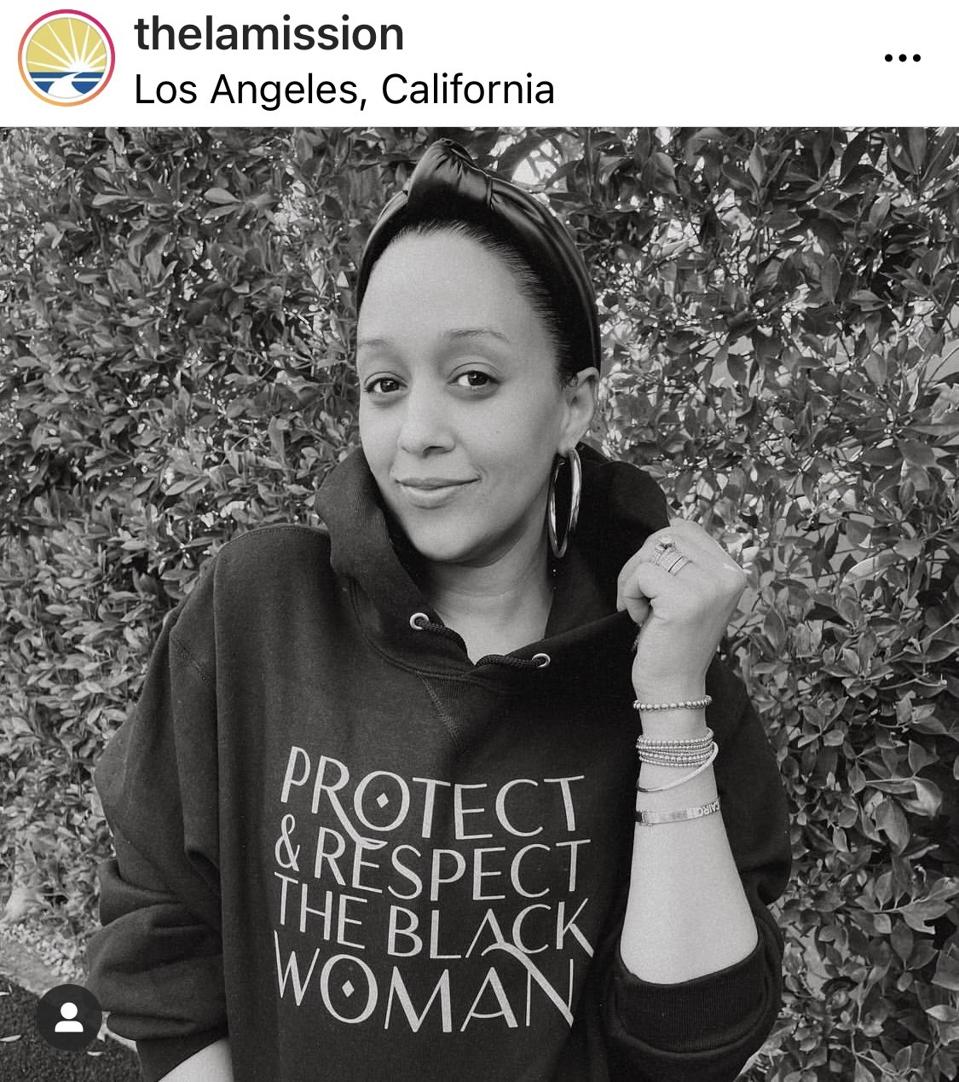 Tia Mowry partnered with the LA Mission Arts Council for their third “Do It For LA” campaign.

“Her first campaign was with Dillon Frances; they kicked her out of the park,” said Trinh. “They sold over $ 15,000 worth of goods – this is the first time the Mission has done anything like this.”

“I mean, it was just phenomenal to see this young group of volunteers taking volunteering to a whole other level.”

As the nonprofit continued to grow on social media, more and more people wanted to help, including Courtney Ann, an art director and stylist with her own relationship with homelessness.

Ann says her father struggled with undiagnosed mental illness for most of his life. At some point, after the diagnosis and after his medication stopped working, he became manic, then psychological and finally homeless, lived on the streets and was unwilling to accept help.

“He’s off the street now, but to have your father out on the street, to have a family member with a mental illness. [Homelessness] is something that has always interested me, “said Ann.

“And I think, more than anything, we need to have conversations about homelessness, mental illness, and everything in between. Because once we can let go of that shame, we can have a positive impact. And we can make a difference and change lives.”

Homelessness has been on the rise in Los Angeles County for years. In June 2020, the Los Angeles Homeless Services Authority released the 2020 Greater Los Angeles Homeless Count results, which found 66,436 people in the county were homeless – a 12.7% increase from the previous year. Experts believe the number is even higher now as Covid-19 and the pandemic continued to affect people’s economic well-being.

A large percentage of LA County’s homeless people were homeless. Another spring 2020 report found that 74% of the people who are homeless in California were recently employed.

The problem is widespread, and nonprofits like the LA Mission work tirelessly to improve these statistics and accommodate people and keep them healthy. The newly formed Arts Council also uses its social media to raise awareness of the issues.

In February, they shared a post on a new Tiny Home Village being built in North Hollywood in partnership with the nonprofit Hope Of The Valley and the city for the homeless and received over 115,000 likes and thousands of shares. 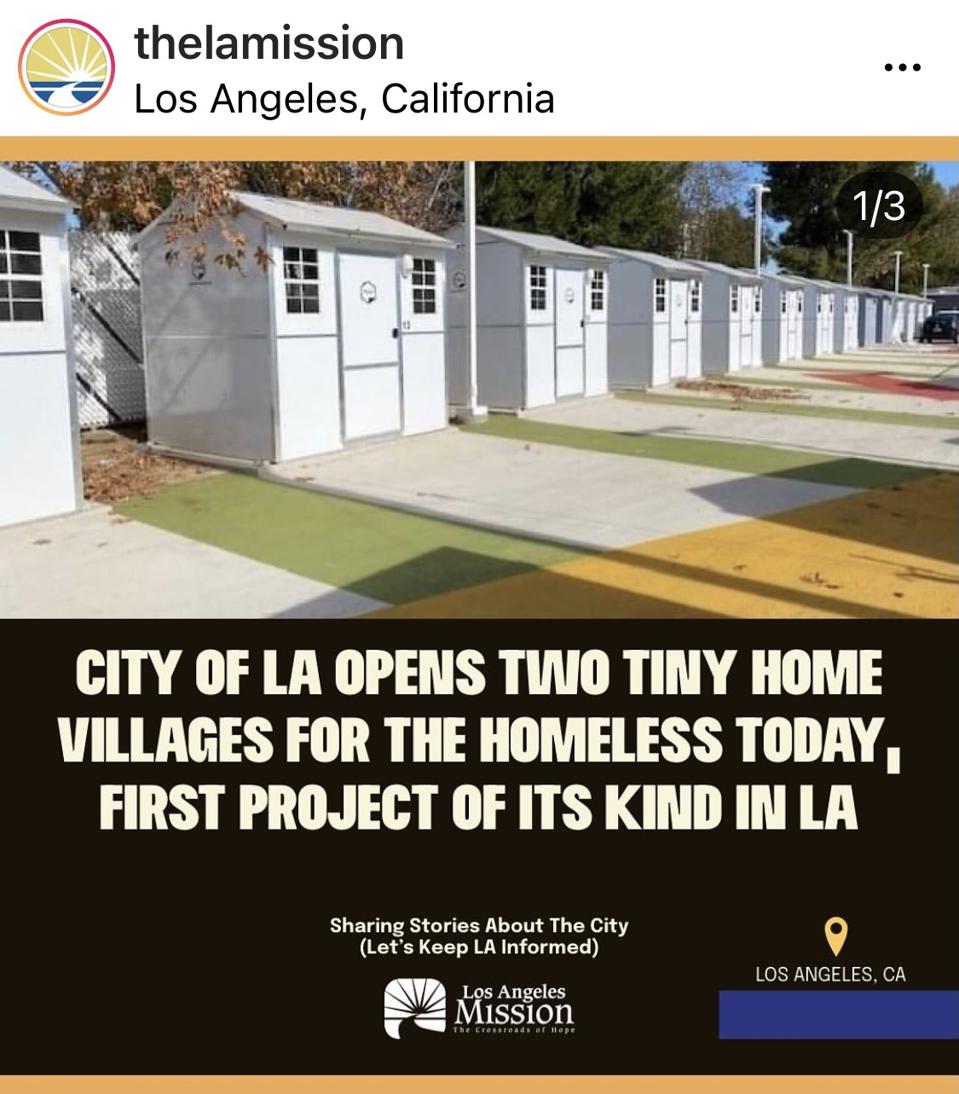 This post on the LA Mission Instagram page went viral and helped raise awareness of the new … [+] Tiny home village.

They also start a podcast to speak to experts who work in the field.

“This was a pandemic project that led to something much bigger than the idea of ​​doing part-time work for a charity,” said Graham. “It was designed that way, but now there’s an entire board – it’s turned out a lot different from what we originally wanted to achieve.”

13 Free Ways to Promote Your Business

Why Your Brand Needs to Focus on Location SEO

How to Create a Successful Blog Strategy: A Step-by-Step Guide

How We Built a Bespoke SERP Tracker and Measured the Results...